I’m coming down from my runner’s high and feeling awfully sleepy as I write this.

Sunday’s race was fantastic. After finally getting to the start line, four of us took off together and it was great. I hadn’t run with most of them in a few weeks, one had recently moved out of the area so we had plenty to talk about and distract ourselves through the first few miles of hills. There were a couple miles markers we passed that I swear were just about 100 yards apart. That was very exciting.

Most of the race was on familiar territory which was nice! The only other DC race I’ve done was the Nike Half this spring and I don’t remember being as familiar and comfortable on the course. Running right down the middle of M Street was pretty fun!

The four of us managed to stay together pretty well up until about mile 10, then we slowly started losing each other up until about 15 I was all on my own. That was also right where a fantastic cheering section (I may be a bit biased) was and a friend jumped in to talk to me for a bit. I was feeling pretty strong at that point.

Around mile 17 I started telling myself that I couldn’t finish at the rate I was going. I was quite pleased that I never doubted that I would finish the marathon but I did doubt that I could run the whole thing. I ran until 18 and then I started walking and running to the end. It worked for me but I think that next time I can do even better!

Almost everyone you ask about the Marine Corps Marathon will complain about the 14th Street Bridge. They are right to do so. It’s almost a mile long of boring concrete with little to look at and it’s after mile 20. That was pretty brutal.

At 23, a friend jumped in to finish with me! That was so helpful. It took my mind off of moving a bit and pushed me to finish in a likely happier mindset.

The race finished up a hill. As we were nearing the finish my friend pointed out it was a great race for me since I’m good on hills. I guess she was right. We hit that hill and I had a burst of energy and passed everyone. Then there’s a sharp turn for the last little bit to the finish line and I took off. I’m pretty sure I finished the fastest I was running the whole race (which is probably a good sign I could have run faster throughout).

Though as soon as I started so fast at the end, I immediately regretted it. I was pretty sure I was going to puke but decided that would be quite embarrassing right before the finish line so I pushed through across the line and then immediately stepped into the grass. Luckily, I didn’t puke.

I proceeded through the long line of Marines waiting to shake my hand and give me a high five. After doing this for thousands of finisher, I was very impressed how genuine and enthusiastic they were. Then we kept walking and finally got my medal! That was amazing. I didn’t cry at all during the marathon (a big change from my first) but came pretty close when I got my medal. That was pretty freakin’ fantastic.

There was so much walking after finishing! Security was tight so non-runners couldn’t get very close to the finish and runners had to walk quite a ways before meeting up with friends/family at the end. When I decided to sit down for a moment before continuing to walk, I was promptly told that wasn’t allowed.

Finally got to my roommate and she had a banana and coffee for me and a sign that said “(ninja kick)” which made me very happy even if I couldn’t do it.

I estimate that between my walk to the metro, the walk to the start, the 26.7 mile marathon (apparently I weave a lot and don’t take the insides of corners), then the walk at the end, I think I probably moved at least 29 miles Sunday. That’s a long way!

We eventually made it to brunch and celebrated with friends who had done other races and supporters. It was fantastic. I couldn’t believe how happy I was! Not just accomplished, but really really happy! Food was good, company was good, and Katya celebrated her birthday with a pretty significant PR! 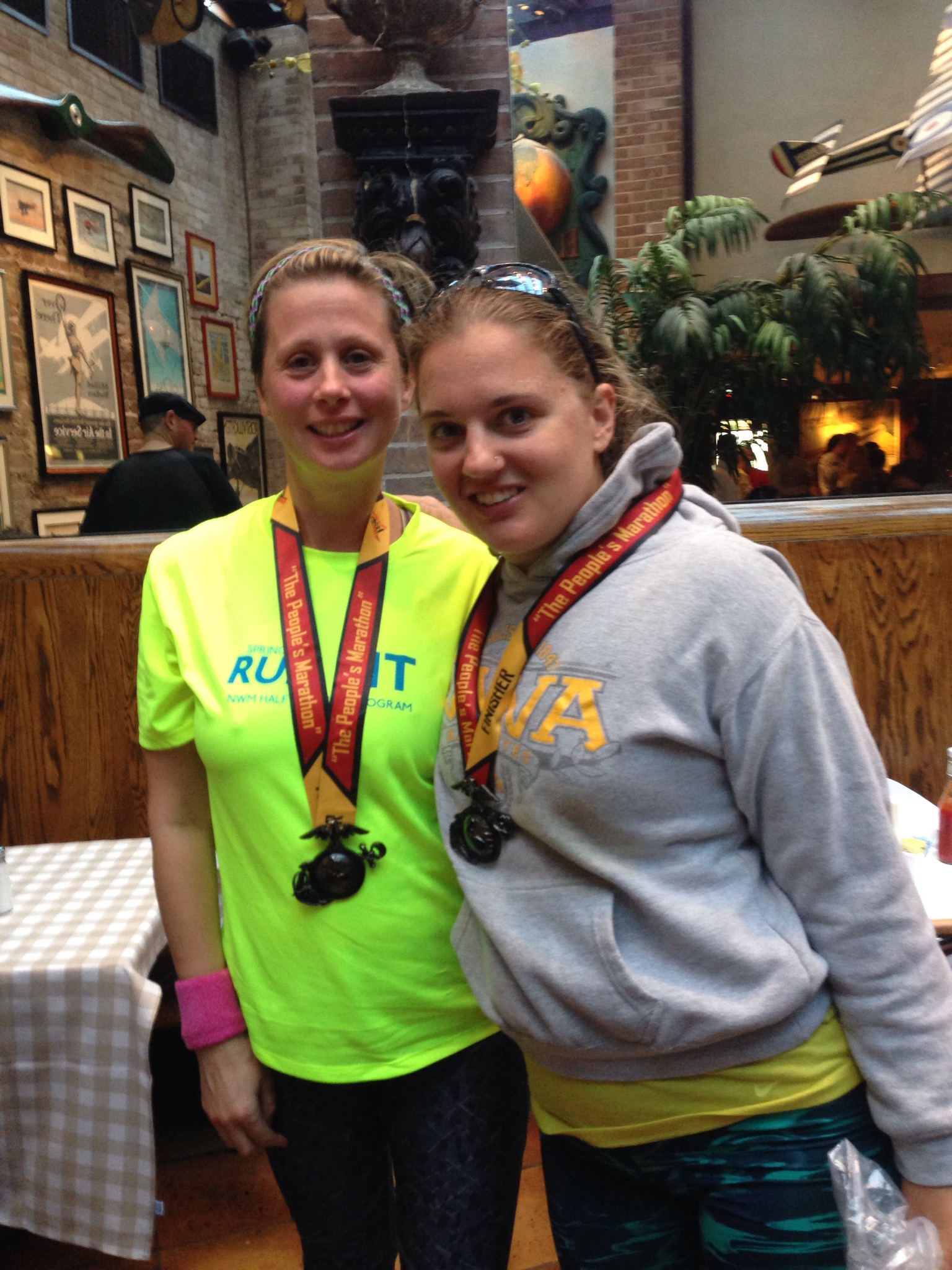 ← When’s the next one?
Remember those goals? →

One thought on “Race Recap: MCM”