Now that I’m mostly fully rested, I’m realizing just how awesome this race weekend was. I’ve now done a couple races that are a bit of a drive away with friends, and it makes the whole weekend an event instead of just the race.

After a winter/sort-of-spring of not training much, I didn’t have a real goal for this race. I knew I could finish and that’s what I wanted to do. I took three weeks completely off of running (and all exercise) in January and then for most of February only ran when Katya and I had arranged to run together. The last couple weeks I’ve been running a lot but that’s not enough to prepare for an awesome race–usually that’s taper time!

At dinner Saturday night, people were talking about goals. Most wanted to PR and I think a couple (maybe most) did. The marathoners decided they wanted to beat Sarah Palin’s 3:59 which led to looking up other famous people’s marathon times. It’s actually kind of fun to do. There are some pretty impressive times on there. For example, Pres. George W. Bush had a time of 3:44:52 and Oprah 4:29:20.

Race day started early because the start time was 7:00! And I was feeling too sleepy and like I wanted to be under blankets to walk so I decided we should drive to the start line a mile and a half away. We walked out of the room…and I forgot my bib. It was even pinned onto my shirt already! This is at least the third race in a row that I’ve made my initial departure without my race number.

We drove over and eventually found a parking spot just a couple blocks away but right before the race started so we got to see the first people cross the start line. Then we jumped in a started!

I knew Alison was going to be ahead of me so I just stayed behind from the beginning instead of trying to keep up for awhile. I felt great. I realized in the car that I’d left my watch at the hotel! I was pretty upset about it but it was okay. After a couple miles I realized it might have been a good thing. Since I didn’t have a real goal, I was able to run by feel. I didn’t push myself, I just ran at a comfortable pace and felt great. Throughout the race I felt like I was really steady, which is not normal for me.

For the first eight miles I was being passed like crazy! I couldn’t understand it, usually that’s true for the first mile or so but it seemed like a wave of people was passing me for a really long time. Even up the one and only hill of the race (I usually pass on hills). But then, around mile ten, I started doing the passing. I was still steady eddy but I guess others were running out of steam.

A few blocks before the end, we turned to finish on the boardwalk. Oh boy was that windy! I was ready to just let go and sprint the finish but boy the wind was strong! The finish line was clear for 7 or 8 blocks which is a long way to think the end is right there, but eventually I got to the finish and “Come on Eileen” was playing as I crossed the finish. My dad gave my brothers and me a great appreciation of Chris Farley so this song always reminds me of Tommy Boy and my dad. It was a nice way to cross the finish.

Alison and I were very quickly reunited after I got my medal, beach towel, hat, banana, and water–boy oh boy was there a lot of stuff for us at the finish line! We then realized we were just a couple blocks from the hotel and at least a mile from the car so we decided to have breakfast.

We went in and the man who seated us told us the marathon would be ending soon. It was before 10 and the marathon started at 8:30. I just said no. He said, “oh yeah, about two hours.” Clearly, he didn’t understand how long marathons are. (We were asked by our server if we won. I think he was teasing. We said yes.) After some quick calculations, we thought we’d have a good shot at seeing some friends run by and we did!

At one point, we both shot out of our chairs and ran through the restaurant to cheer and take a picture…when I returned I was asked by three people if we planned to return. Oops! We weren’t dining and dashing. Just excited to cheer!

We then had to dip our toes in the water. It was 48 degrees outside and really windy but what else would we do after crossing the finish line at the beach?! 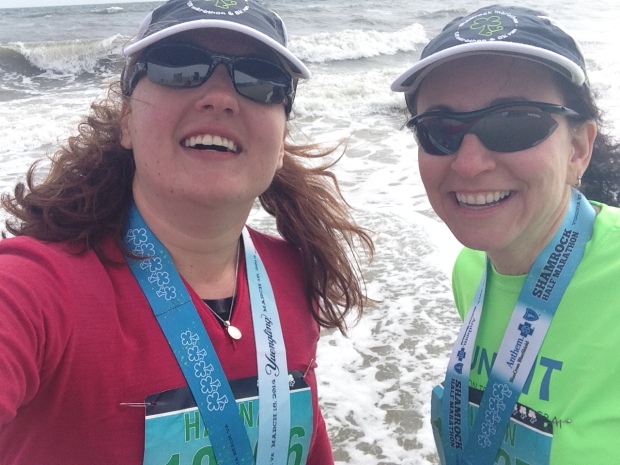 After quickly showering and packing, we went to watch our fellow Fleet Feeters cross the marathon finish line! Some major awesomeness happened over the weekend. So great to be a part of a fun running community.

So, after less than 24 hours in Virginia Beach, we had a rosey-cheeked hotelier, awesome server, ran a race, funny restaurant staff, toes in the Atlantic, watched friends finish their race, a coffee shop that didn’t have an espresso bar and, finally, a stop at Bad Ass Coffee.

Then, geez louise, a six hour (220 mile) drive home to arrive to a snow storm! I’m convinced there are no planning people involved in highway construction in Virginia. It’s incredibly inefficient and there is a lot of bottle-necking.