8 miles to start the weekend! 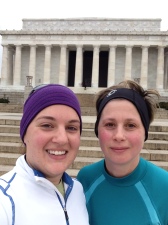 We’re both looking pretty good at the halfway point of a cold run!

Yesterday started out with eight miles to the Lincoln Memorial and back. I don’t think being able to run there (or many other places in DC) will ever get old.

Also, I think I’ve mentioned about a gazillion times how much I love group training. Today was the second long run of training to prepare for the Shamrock Marathon in Virginia Beach and Katya was there today!

I met Katya during last year’s winter training program and, through running together for countless hours, we became good friends. She didn’t train over the summer because she’s smarter than I am and didn’t want to train in the heat. But now she’s back! We hadn’t seen each other in a couple weeks so we had a lot to talk about and the eight miles flew by! I just hope we have that much to talk about when we do 20 in February!

Unfortunately I’m going to be gone the next two Saturdays so I think when I’m back in three weeks we should again have plenty of material to get through that week’s seven miles. Well, I guess it’s not that unfortunate because next Saturday I’ll see the world’s cutest toddler, also known as my nephew.